The screening began with Mike Brown Sr. and director Jason Pollock requesting a moment of silence from the crowd in memory of Mike Brown Jr.

There was, for me, a moment of haunting clarity where it hit me that everything that happened with Mike Brown Jr. was real. It was one thing to see the horror of his death and the ensuing events unfold on television. It was completely different to actually be in the same room as Mike Brown Sr., knowing that I was approximately one degree of separation from his son, who would forever change the world from the moment of his untimely death. It was then that I knew that Jason Pollock’s Stranger Fruit was going to be something incredibly powerful.

The overall set-up of the documentary focuses primarily on explaining the many different parts of the whole that was Michael Brown’s death and the events following it. It begins with the story of his death, something most people are generally familiar with, and explains the inconsistencies in the story via forensics, ballistics, and witness testimony. This was especially enlightening because, in the aftermath of Michael Brown’s death, there seemed to be so much conflicting and muddled information every day that it was difficult to really understand what actually happened.

Pollock does a great job of presenting this information in a way that does not seem overwhelming or heavy handed. The most important thing about this process is that not only is Pollock presenting information that is already in circulation, but he is also giving a voice to information that was swept to the side as the madness of the case escalated. He specifically disproves the myth that Officer Darren Wilson perpetuated: that Michael Brown charged him and he shot him in self-defense. This may be one of the most earth-shattering moments in the entire documentary as the forensics, ballistics, and witness testimonies intersect to form the true story of what happened that day.

From there, Pollock dives into the complex web of what can only be described as institutional racism that contributed to a lack of justice for Michael Brown. This particular moment is better experienced than explained. Even though I was familiar with some of the major players on the legal end of this case, I still had no idea how interconnected they were, nor was I familiar with their respective histories. This section was shocking for me as it painted a picture clear as day that there was, at best, some kind of negligence involved in this case and, at worst, extreme institutional racism not only in Ferguson but in surrounding counties and municipalities.

Pollock then proceeds to discuss the effect of Mike Brown and the subsequent movements created after his death. Watching this section, it was difficult to wrap my mind around the fact that it has been only about two and a half years since Michael Brown’s death. From his death sprung worldwide protests,”Black Lives Matter”, and “Hands Up, Don’t Shoot”. Most notably, the protests in Ferguson exposed a violent police state that did not seem to have any regard for the rights of citizens to peacefully assemble and fairly criticize the local and national government for its role in the death of Michael Brown and the subsequent lack of consequences for his killer. Police used tanks, assault rifles, tear gas, and tactical riot gas in the face during peaceful protests, which only exacerbated tensions further. 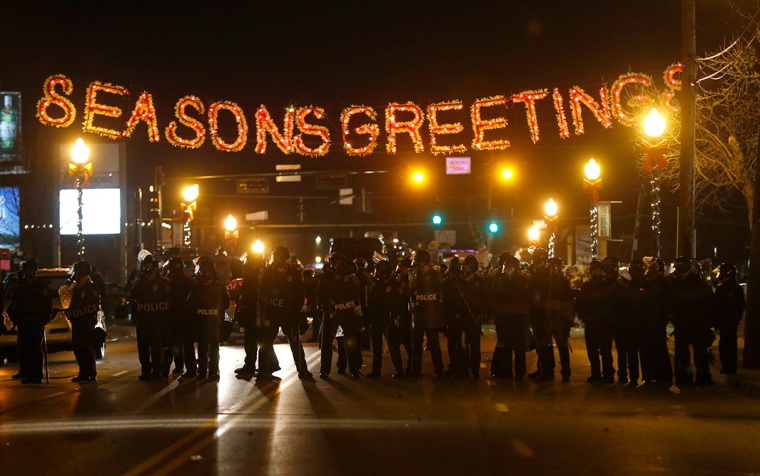 Throughout this documentary as well as afterward during the Q&A session, Pollock stresses that his goals in creating this documentary was both to recover Michael Brown’s character after the media shredded it and also to prove that Michael Brown’s death was a racially motivated murder, plain and simple. The last fifteen to twenty minutes of the documentary are allotted specifically to Lesley McSpadden, Michael Brown’s mother, her sister, her mother, as well as other family members discussing their favorite memories of Michael, whom they affectionately referred to as “Mike Mike.” I found it especially powerful that the women in Mike Brown’s life, as well as the women in the lives of other victims of police brutality, were given a platform to express not only their grief, but their anger, sadness, and disappointment with a system that failed them as well as their loved ones.

My only complaint, and it is an assuredly minor one, is that the editing could stand to be a bit smoother. At times, Stranger Fruit came across as somewhat choppy. However, this did absolutely nothing to detract from the overall message of the documentary. Pollock himself even stated in the Q&A section following the screening that the documentary was still “alive” in the sense that more edits would take place.

Though Jason Pollock has been subjected to extremely hateful messages and rhetoric since the premier of Stranger Fruit, his passion to reveal the truth about Mike Brown’s death and the cover-up thereafter has not wavered in the slightest. In the age of Trump, this documentary could not be more timely or important. I certainly look forward to the mass distribution of this documentary as well as its role in renewing and continuing the drive for justice and an end to police brutality in America.

Nerd with a soft spot for tv, film, and video games.